2019 Citizen of the Year | Betsy and George Wiegers 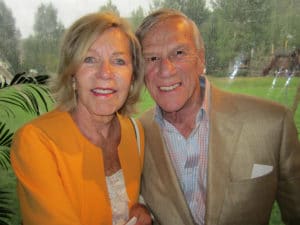 In the Vail Valley community, it is Betsy and George Wiegers who are the embodiment of the concept, coining it anew through incredible acts of philanthropy throughout Eagle County and beyond.

For their good work in this community and beyond, the Vail Valley Foundation today named Betsy and George Wiegers as the 2019 Vail Valley Citizens of the Year.

The pair will be honored at the Vail Valley Foundation’s 2019 Black Diamond Ball, set for Feb. 15 at the Park Hyatt in Beaver Creek and themed on “the Orient Express.”

“There is virtually no area of community life that they have not elevated through their giving, Board service, vision, and foresight,” said Ann Smead, Chairman of the Vail Valley Foundation Board of Directors. “We are so thankful to them, and I feel, in truth, they are honoring us by allowing us to honor them as Citizens of the Year.”

Improving the community
Betsy and George have each specialized in various areas of work. Betsy’s impact has largely focused largely on the arts, education, and overall beautification of the communities she touches, even as her philanthropic giving has spanned nearly all walks of life in the Vail Valley.

She has been instrumental in the flourishing of the Vail Dance Festival, Bravo! Vail, and support of classical music and dance in general, including her roles in strong support of American Ballet Theater, the Denver Art Museum, the Betty Ford Gardens, the Philadelphia Philharmonic, the New York Philharmonic, and the New York Historical Society. She plays a crucial role on the Vail Dance Festival committee, and as underwriter for countless performances in both dance and classical, including the creation of the Betsy Wiegers Choral Fund, in honor of John W. Giovando, which brings choral work to Bravo! Vail each summer. She has been a trustee of Bravo! Vail and served on the Board of Directors for the Vail Valley Foundation since 2007.

For newcomers to the Vail Valley, it can come as a serendipitous surprise that the venerable New York Philharmonic has a summer residency here, and has since 2003. Only a very few are aware that it was Betsy who played the pivotal role in instigating this program.

Taking care of heart, mind, and body
It has largely been George who has spearheaded the couple’s work in mental and physical health, environment, and veteran’s affairs.

George was the visionary behind the creation of the Helen and Arthur E. Johnson Depression Center at the University of Colorado Anschutz Medical Campus.

“I think George’s legacy is huge, and it’s really changed the face of mental health care in Colorado and beyond,” said Heather Mulvihill, Chairman of the Depression Center.

George has also been a major funder of Dr. Karl Deisseroth, whose laboratory at Stanford is globally recognized as an epicenter of new research in the fields of optogenetics and CLARITY mapping – two cutting-edge technologies.

Betsy and George have been strong supporters of the Vail Valley Foundation’s mission to improve quality of life in the Vail Valley through arts, athletics, and education, supporting the VVF’s work from the Vilar Performing Arts Center, to the Gerald R. Ford Amphitheater, YouthPower365’s education work, the aforementioned Vail Dance Festival and beyond.

They have also been strong supporters of the Eagle County Land Trust and Vail Health.

Betsy and George met in New York, soon after George left the Army. They were married there in 1965. Their son Alex was born in 1968, and is now married to Connie Wiegers. Betsy and George are now loving role models to granddaughters Hanna Wiegers and Lizzy Wiegers, as well as to the extended Wiegers family.

Betsy and George Wiegers join a distinguished list of previous recipients of the Citizen of the Year honor:

To learn more about the Vail Valley Foundation activities and events visit www.vvf.org.